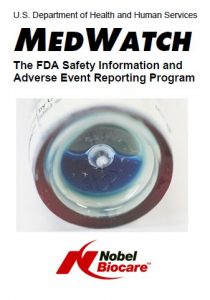 A Las Vegas dentist has filed a FDA Med Watch report regarding the integrity and therefore sterility of Nobel Biocare Replace Implants. To quote from the report:
“I have experienced substantial and unexplainable failures with Nobel Biocare`s (“Nobel”) Replace(TM) Implants. Of 88 consecutively placed implants,34 required removal due to pain or infection for a failure rate of 38.6% (Attachment #1). I doubt these failures are caused entirely by my case selection or surgical skill because I also recorded the clinical success of 51 consecutively places Implant Direct RePlant(TM) Implants from 2008-2009 with only 2 requiring removal for a failure rate of 3.9% I brought this information to Nobel Biocare`s attention, as shown in my letter of October 27, 2008 (Attachment #3) and submitted failure reports on their forms (Attachment #4). Nobel refused to take back my remaining implant inventory, contending that the problem lay with my surgical skills rather than with their implants. After Nobel`s refusal, I continued to use some of my remaining inventory of Nobel Replace implants while also incorporating Implant Direct`s RePlant implants into my practice. After experiencing a significantly higher failure rate with the Nobel Replace implants compared to Implant Direct`s RePlant implants, I stopped using the Nobel implants altogether. Seven Nobel implants from my inventory were sent to Nelson Labs (Attachment #5) and eight were sent to an ISTA Certified Lab (Attachment #6) for dye immersion tests. As can be seen on these reports, all of the implants tested failed to provide a seal required to assure the maintenance of sterility of the contents.”