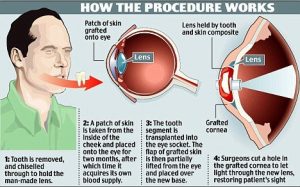 Martin Jones, 42-year-old builder, was left blind after an accident at work more than a decade ago. After a remarkable operation in which part of his tooth was implanted in his eye, he can now regain some of his lost sight. The procedure involved taking a minute section of a patient`s tooth, reshaping and chiselling through to grip the man-made lens which was then placed in its core.
It is implanted under an eyelid where it become covered in tissue.
The process required a living tooth as an implant because doctors suggest there are chances the eye would reject a plastic equivalent.
So a canine – which is the best option due to its shape and size – was taken out of Mr Jones` mouth.
A patch of skin is then taken from the inside of the cheek and placed in the eye for two months, where it gradually acquires its own blood supply.
The tooth segment is finally transplanted into the eye socket. The flap of grafted skin is then partially lifted from the eye and placed over its new sturdy base. Finally, surgeons cut a hole in the grafted cornea to let light through.